Thomas the Tank Engine Wikia
Register
Don't have an account?
Sign In
Advertisement
in: Traction engines, Magazine-only characters, The Mainland,
and 4 more

Trevor met the traction engines when he visited a rally on the Mainland. One had a canopy for the driver to sit under, while another had heavy rollers for paving roads.

One of the traction engines is based on a Fowler Showman's Engine, while the other is an Aveling-Barford steamroller similar to George and Buster.

The showman's engine is painted yellow with red lining and rims as well as a red roof. Its smokebox is painted grey while its chimney is black with a copper cap.

The steamroller is primarily painted grey. It has a red firebox and lining. Its flywheel is painted red with a yellow rim, while its front roller is entirely yellow and its roof is blue. Like the showman's engine, it has a black chimney with a copper cap, however it also has an orange spark arrestor on top. 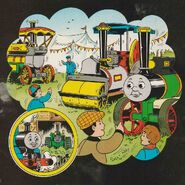 Magazines & Annuals
*Disclosure: Some of the links above are affiliate links, meaning, at no additional cost to you, Fandom will earn a commission if you click through and make a purchase. Community content is available under CC-BY-SA unless otherwise noted.
Advertisement