The Man in the Hills

The "Man in the Hills" is a tall man dressed in white who lives in the hills of Sodor. According to Sir Handel, no one has ever seen him. However, a chalk figure of him holding a walking stick is drawn on a hillside next to the Skarloey Railway. Thomas wanted to show the figure as a birthday gift for Mr. Percival's birthday.

The chalk drawing is located at Green Hills Junction. 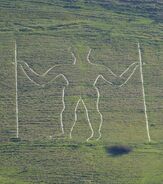 The Long Man of Wilmington
Add a photo to this gallery
Stepney's Branch Line
Skarloey Railway
* RWS only | ** T&F only
Retrieved from "https://ttte.fandom.com/wiki/The_Man_in_the_Hills_(figure)?oldid=1902461"
*Disclosure: Some of the links above are affiliate links, meaning, at no additional cost to you, Fandom will earn a commission if you click through and make a purchase. Community content is available under CC-BY-SA unless otherwise noted.