The Mayor of Sodor

The Mayor's Yacht is a sailboat belonging to the Mayor of Sodor. Thomas was to take it directly to the Norramby Fishing Village, but he neglected to take the engineer with him to lower the mast, which eventually got caught in the wind. Thomas was blown along with the boat. He eventually went back to Brendam to collect the engineer.

The yacht was recreated in CGI for the thirteenth series opening sequence.

Note: Top left
Add a photo to this gallery 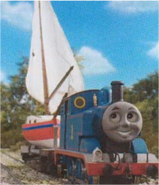 Non-rail vehicles
* RWS only | ** T&F only | *** Other Media only
Retrieved from "https://ttte.fandom.com/wiki/The_Mayor%27s_Yacht?oldid=1662686"
Community content is available under CC-BY-SA unless otherwise noted.