The Milk Float, driven by a milkman, transports dairy products all over the island. The milk float once broke down and Caroline helped the milkman complete his rounds.

In its first appearance, it was painted blue with the words 'SODOR MILK CO.' written on its back. In later appearances it was coloured fully white. 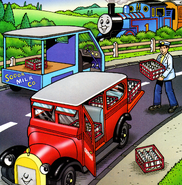 Non-rail vehicles
* RWS only | ** T&F only | *** Other Media only
Retrieved from "https://ttte.fandom.com/wiki/The_Milk_Float?oldid=1543201"
Community content is available under CC-BY-SA unless otherwise noted.