“Look out for wee ghosts! They make strange things happen!"
"Watch out for naughty gnomes, they'll climb down your funnel!”
―Donald and Douglas

The Most Beautiful Station

The Most Beautiful Station is a magazine story, illustrated using photographs from the television series.

Every year, the railway staff take part in a contest to find Sodor's most beautiful station. All the stations are decorated with flowers, shrubs and colourful hanging baskets. The engines love this contest.

Percy is still worried when he sets off for Maithwaite the next day. On the way, Percy passes Donald and Douglas who tease poor Percy. They tell him about ghosts and naughty gnomes which go down funnels.

By the time Percy reaches the old mine, it is very foggy. Suddenly, Percy spots some strange figures up ahead. His driver reassures him that the figures are just garden gnomes to decorate the stations with which they have come to collect. Percy waits for something spooky to happen while his driver and fireman collect the gnomes, but nothing happens. Percy happily sets off to deliver the gnomes to Lower Tidmouth. 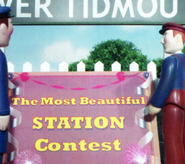 Add a photo to this gallery
Retrieved from "https://ttte.fandom.com/wiki/The_Most_Beautiful_Station?oldid=1769977"
*Disclosure: Some of the links above are affiliate links, meaning, at no additional cost to you, Fandom will earn a commission if you click through and make a purchase. Community content is available under CC-BY-SA unless otherwise noted.