“Humph! Very important people should really be picked up by a splendid red engine like me! Fancy choosing little Thomas!”
―James

The New Station is a magazine story.

Later, Thomas puffs to the harbour with Annie and Clarabel where the very important people climb aboard. On his way to the new station, Thomas approaches a bend in the line. Rather oddly, the signal is red. The driver climbs down and runs ahead to see what the trouble is. He comes back and tells Thomas that James has broken down ahead and is sulking about not being chosen to collect the important people. Thomas is uncoupled from his train and he shunts James into a siding to wait for an engineer. Thomas then collects his train and sets off again.

As for James, he has to spend a week at the Works and thinks he would never boast again. 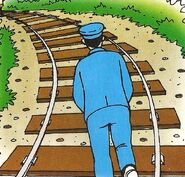 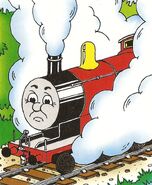 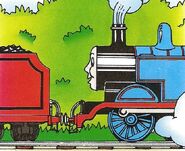 Thomas and the Fat Controller with the VIPs 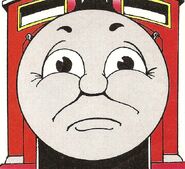 Add a photo to this gallery
Retrieved from "https://ttte.fandom.com/wiki/The_New_Station?oldid=1256133"
*Disclosure: Some of the links above are affiliate links, meaning, at no additional cost to you, Fandom will earn a commission if you click through and make a purchase. Community content is available under CC-BY-SA unless otherwise noted.