“You all have your own branch lines. Perhaps the Fat Controller's going to give me one, too, at last.”
―Percy

The New Track is a magazine story.

Percy is excited to hear from Henry about a new track being built by the seaside, and tells Thomas, Edward and Duck about it. He thinks it will be a branch line, and that he might be given it to run. The Fat Controller soon arrives and asks Percy to collect some rails from the Harbour. Percy excitedly leaves, and Thomas and Duck realise that the Fat Controller never says who the line is for.

Percy arrives at the Big Harbour, and collects the new rails in a line of trucks. He takes them along the coast to the pier where construction has begun. He spots metal frames, and assumes it is a station building. That night Percy dreams of the grand opening of his new line.

A few days later, Percy returns to find the line has been built high on giant frames. He complains that it is too high and narrow, and that he does not like heights. He stops talking about it and becomes depressed. Thomas asks him what is wrong, and Percy declares he does not want the new line after all. Henry then arrives with small open carriages in his trucks. Percy exclaims they are much too small for him to pull.

When the 'new line' is opened Percy finally discovers what it is - a roller coaster. Henry apologises for saying it was a new line, but Percy is happy - he would rather go on someone else's branch line than one as scary as the roller coaster. 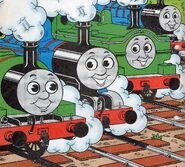 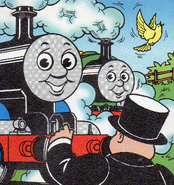 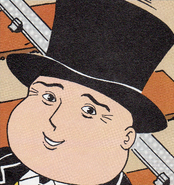 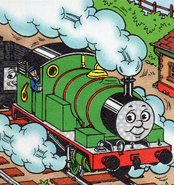 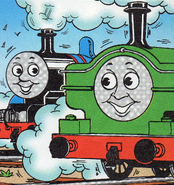 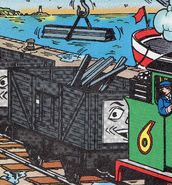 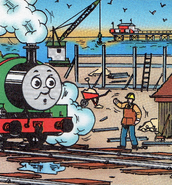 Add a photo to this gallery
Retrieved from "https://ttte.fandom.com/wiki/The_New_Track?oldid=1732578"
*Disclosure: Some of the links above are affiliate links, meaning, at no additional cost to you, Fandom will earn a commission if you click through and make a purchase. Community content is available under CC-BY-SA unless otherwise noted.