“Now I've helped save someone from scrap!”
―Oliver

The Play Train! is a magazine story.

Oliver is always wary of visiting the scrapyard because he had been saved from scrap. One day, he sees an old carriage there. He is upset and wishes he could save it. Later, he tells Thomas about the coach before he leaves to take Lady Hatt to a playgroup which she helps the vicar run in the church hall. Later, Thomas has an idea and the Fat Controller orders Oliver to collect the scrap coach. She is repainted and now she acts as a play train which tours the villages of Sodor that are too far away to get to the playgroup at the church hall. Oliver feels proud that he has helped save something from scrap too. 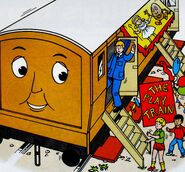 Add a photo to this gallery
Retrieved from "https://ttte.fandom.com/wiki/The_Play_Train!?oldid=1643604"
Community content is available under CC-BY-SA unless otherwise noted.