The Railway Rink is a magazine story.

It is freezing cold as Percy pulls out of the engine shed one morning. Percy rolls onto the turntable, but he cannot grip the rails. As the turntable starts to turn, Percy slips right off the table and falls on his side. Harvey has to lift Percy back up onto the rails again and the Fat Controller warns the little green engine to be more careful in future.

As Percy collects some passengers from the station, he sees Stephen and Bridget waiting on the platform. They tell Percy that the Fat Controller is taking them to an open-air ice rink at Wellsworth.

When Percy arrives at Wellsworth, he sees the massive ice rink which has been erected as a special attraction for the winter. Percy stands in a siding and watches all the people skating round. Stephen and Bridget are soon skating well, but their grandfather is not so lucky; he loses his balance and falls over. The Fat Controller tells Percy that he will not be skating any more, but he wishes there was a skating rink nearer home for Bridget and Stephen.

When everyone have finished skating, they all board Percy and head home. On the way, Percy is stopped by a man and his family who are waving urgently. The man explains that they have been skating, but now their car has broken down. Percy offers them a lift and they climb aboard the train.

Eventually, the Fat Controller persuades the ice rink company to open one nearby. It is very popular and is packed with skaters both amateur and professional. On the day of the opening, the man that Percy had helped arrives with a big model of Sir Topham carved out of ice as a thank you. The Fat Controller is delighted and Harvey lifts the sculpture into the middle of the rink. 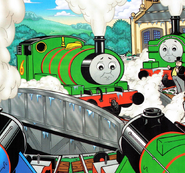 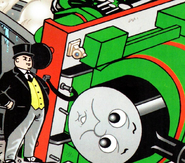 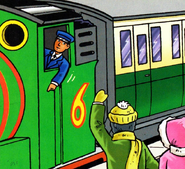 Add a photo to this gallery
Retrieved from "https://ttte.fandom.com/wiki/The_Railway_Rink?oldid=1685510"
*Disclosure: Some of the links above are affiliate links, meaning, at no additional cost to you, Fandom will earn a commission if you click through and make a purchase. Community content is available under CC-BY-SA unless otherwise noted.