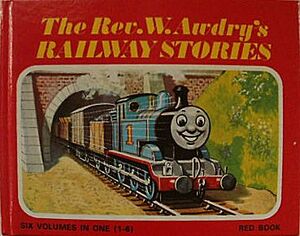 The Rev. W. Awdry's Stories is a series of four Railway Series compilation books each containing six books from the Wilbert Awdry-era. each book was all colour coded as seen below and released between 1984 and 1986.

Retrieved from "https://ttte.fandom.com/wiki/The_Rev._W._Awdry%27s_Railway_Stories?oldid=1590335"
*Disclosure: Some of the links above are affiliate links, meaning, at no additional cost to you, Fandom will earn a commission if you click through and make a purchase. Community content is available under CC-BY-SA unless otherwise noted.