“Just wait until we see James. A princess may have used his carriage but I'm carrying a Queen!”
―Annie

19 February 2014
The Royal Carriage is a magazine story.

The engines are excited; a special carriage is coming to Sodor. Percy has heard that the carriage is even more important than an express carriage, something which Gordon does not agree with. Thomas says that the Fat Controller has told him that the special coach is to be on show at the Sodor Museum and that James is collecting it now.

Later, Thomas is pulling Annie past the Museum when he sees James there with the special carriage. The carriage is magnificent with comfy chairs and a royal blue carpet. James explains that the carriage used to belong to a princess. Annie wishes she could meet a princess.

The next day, the Fat Controller has even more exciting news. He says that the carnival this year is to include a Royal Train Tour. He goes on to say that Thomas and Annie will be polished up and decorated to be the Royal Train. Thomas and Annie cannot believe their luck.

After a washdown, Thomas and Annie are fitted with crowns and head off to Wellsworth. On the platform is a very special passenger; the carnival queen. She steps aboard Annie and Thomas pulls away. Everyone comes out to wave to the queen and her Royal Train. Annie is very delighted with her important job. She is looking forward to meeting James; his train may have once carried a princess, but she is carrying a queen. 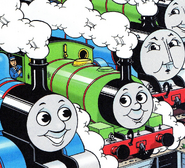 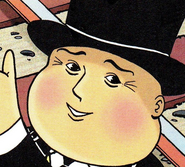 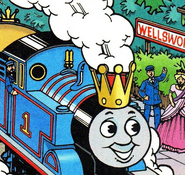 Add a photo to this gallery
Retrieved from "https://ttte.fandom.com/wiki/The_Royal_Carriage?oldid=1684885"
*Disclosure: Some of the links above are affiliate links, meaning, at no additional cost to you, Fandom will earn a commission if you click through and make a purchase. Community content is available under CC-BY-SA unless otherwise noted.