So far, there have been at least four controllers who have managed the Skarloey Railway in the Railway Series.

Mr. Mack was the first manager of the Skarloey Railway. It is unknown who succeeded him when he retired.

He did not know much about engines' feelings and after failing time and time again to steam Skarloey, he lost patience and covered him up with a tarpaulin. Later, while travelling on Skarloey, he was knocked into a bush after he closed Skarloey's regulator too quickly and he rode in Beatrice for the remainder of the journey. However, Mr. Mack did gain patience after he brought Mr. Bobbie to be Skarloey's driver. He then arranged for Skarloey to have an extra set of wheels and be rebuilt with a cab.

Mr. Mack did not know much about an engines' feelings and did not have the proper patience to steam an engine. However, he did gain patience after he brought Mr. Bobbie to be Skarloey's driver.

The Island of Sodor: Its People, History and Railways (RWS)

Having joined the Company at the age of 16 in 1897, he took over as General Manager in 1936 and for some time before Brown's death in 1950 ran the railway with the line's Foreman, Mr David Hugh. This continued for a little while in 1951, until Robert stepped down in favour of his only son, Peter.

He had several sisters, including one named Beatrice, who was the great-grandmother of Nancy.

He was first hired as Rheneas' driver when the railway was facing hard times and he also served as a guard for all of the trains. When Stuart and Falcon were purchased by the Skarloey Railway, Stuart was renamed Peter Sam in his honour. He then attended Skarloey and Rheneas' hundredth birthday and invited Sir Robert Norramby, the Duke of Sodor. In 1959, Mr. Peter Sam found an old saloon coach in a garden at Harwick. When he retired in 1980, he was succeeded by his son, Roger Sam.

Mr Peter Sam was rather strict and reprimanded engines whenever they would get into trouble; Sir Handel was most impressed by this. He was firm, but fair and once jokingly threatened to take Sir Handel to pieces when he pretended to be ill so he would not have to take part in the television event of Skarloey's 95th birthday. However, Duncan thought that the Thin Controller only picked on him.

Mr. Roger Sam (1948-) is the current controller of the Skarloey Railway.

After ten years of acting as assistant manager, he took over the role of his father in 1980 with the unanimous approval of the Skarloey Railway Board.

In 1982, he chose Sir Handel to visit the Talyllyn Railway to help while Talyllyn was being mended. He later arranged for another engine to be built and help out with the additional traffic that had come to the railway line over the years. He named the engine, Ivo Hugh, after the railway's former foreman.

When Sir Handel broke his fire-bars loose on purpose, Mr. Roger Sam sent him to the shed and he awaited for repairs. However, Sir Handel thought that Mr. Roger Sam had locked him in the shed in disgrace and longed to be let out. When the Thin Controller finally came to see Sir Handel, he was quick to confess that he damaged his fire-bars on purpose. The Thin Controller, thinking quickly, thanked Sir Handel for admitting his mistake and arranged for him to receive some new fire-bars. However, he neglected to tell him that they had only been delivered that morning. 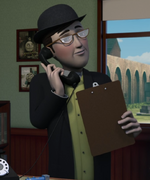 In the television series, the role of the controller of the Skarloey Railway was first taken by Sir Topham Hatt in the fourth series and continued until the seventh. In the ninth series, Mr Peregrine Percival became the second controller of the Skarloey Railway. He was hired to help Sir Topham Hatt manage the ever-increasing size of his railway industry. Like the controllers in the Railway Series, Mr Percival is nicknamed the Thin Controller. The Thin Controller's attire and physical appearance in the 1979 annual may have been the inspiration for Mr. Percival, as they both have the same hairstyle and wear the same clothing and bowler hat.

Mr. Roger Sam and Sir Handel
Add a photo to this gallery 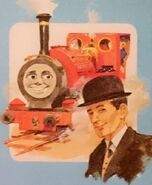 Mr. Peter Sam in an annual
Add a photo to this gallery

Mr. Mack in the My Thomas Story Library series

Mr. Peter Sam in the My Thomas Story Library series 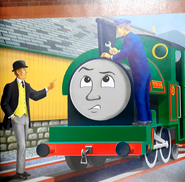 Skarloey Railway
* RWS only | ** T&F only
Retrieved from "https://ttte.fandom.com/wiki/The_Thin_Controller?oldid=1921468"
*Disclosure: Some of the links above are affiliate links, meaning, at no additional cost to you, Fandom will earn a commission if you click through and make a purchase. Community content is available under CC-BY-SA unless otherwise noted.