2014
The Train Shed was an official Thomas & Friends based theme park in Sydney, Australia.

The Train Shed operated a 7.25" gauge Miniature Railway with a Thomas theme from 1996 to 2014 on the western outskirts of Sydney.

The railway was built over the 18 years of its operation, growing to around 1km of track, with a turntable, traverser, storage sheds, tunnel, bridge, and three stations. The railway operated at its peak with seven four-car enclosed trains in continuous operation, for 150 days per year.

The owners have continued their passion with the manufacture of ride-on miniature trains for home and clubs as Mini Train Systems. They sell individual engines as well as packs with rolling stock and 7 1/4" track layouts. The company also offers consultation on building a 7 1/4" scale railway, explaining gradient limits and track cost,

The park also operated Model Train-sets, where children could drive G scale or HO scale model Thomas trains, and an extensive HO scale NSWGR model railway. The model railway featured many limited edition Hornby models such as Bear (D7101), Toad and Oliver. The park also featured a Thomas and Friends ToyShop specialising in short-run items, and a Kiosk for lunch and snacks.

Fully catered and hosted Birthday Parties were held three times per day in the ex-NSW suburban double-deck railway carriage. These included catering, a host to run the party, train rides and cake.

For a short time in 2012-2013, a branch was operated at the Richmond Vale Railway Museum, outside Newcastle in NSW, Australia. This track continues to run as a private operation by the Museum, using non-Thomas equipment.

A portable track was also regularly taken to Exhibitions and Fetes, with Thomas and a second character running rides for the days.

In 2014 the park was closed to make way for the new Badgery's Creek Airport. This was the end of 18 years of operation at Vicary's Winery and 2 years of the previous operation at Emu Plains with the Powerline business.

The Thomas characters were sold on after the park closed as either character's from the show, or repainted to look like real engines. Many of the trains now repainted can be regularly seen at Miniature Railways around the country. Thomas and James are also attractions at NSW Rail Museum's Day Out With Thomas Events and Steam Festivals.

Thomas and Toby were built for use at Emu Plains when the original business was created, branching off from Powerline Models. These moved to the new site, where James, Percy, Mavis and then Gordon were built.

Bill and Ben (2013) were constructed and tested as the next two characters for release. Prior to final painting, the notice was given that the site would be lost, and as a result, the final paintwork was not completed. These engines ran for the final year as non-character locomotives and saw extensive service.

Additional locomotives were built or saw service at the park over this time:

All locomotives which were built for or saw regular service on the railway were Battery-Electric. 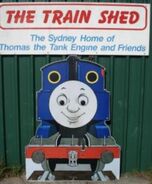 Thomas and Percy operating on the Portable Track 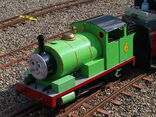 Gordon, being driven by Mike Whitney, as part of filming the TV show Sydney Weekender. 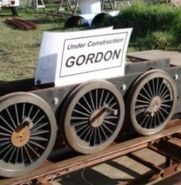 Mavis (with one of Toby's faces)

Toby, Mavis and Gordon in the Central stabling sidings

Orange Coaches
Add a photo to this gallery

Retrieved from "https://ttte.fandom.com/wiki/The_Train_Shed_(theme_park)?oldid=1907016"
*Disclosure: Some of the links above are affiliate links, meaning, at no additional cost to you, Fandom will earn a commission if you click through and make a purchase. Community content is available under CC-BY-SA unless otherwise noted.