“Pheeep! Foul! Free kick, ref!"
"All right, all right! Keep that noisy whistling down! You've got football fever!"
"What's that? Am I ill?”
―Thomas and Percy

The Winning Shot is a magazine story.

Thomas has football fever. At the Main Station yard, he keeps whistling and dreaming about being at a football match. Everyone is excited because of the upcoming Saturday match, but Thomas has more reason to be excited than anyone else - he has to collect the visiting players coming from the Mainland. As he sets off to the airport, he imagines he is steaming down a football pitch, dribbling a ball before his buffers. Thomas takes the visitors to their hotel near the football ground and is soon watching them practice.

On Saturday, Thomas turns up early to take the visiting team to their match against the Wellsworth Wanderers. As Thomas approaches the home team's stadium, he sees two people running from the ground. The Wellsworth Wanderers' coach emerges calling for assistance; the two men have stolen the winners cup. The thieves bundle into a car and race off. Luckily, the road runs next to the tracks and Thomas is able to give chase. Soon, they find themselves in the countryside. Terence is on the road ahead and the thieves swerve to avoid him. With screeching wheels, they land in a ditch. In all the confusion, a hay bale falls from Terence's trailer and onto Thomas' line. But instead of slowing down, Thomas charges the bale. It flies through the air and lands right in front of the thieves making their way across a field on foot. The burglars are so surprised to see the hay bale that they fall over each other. Then the football players arrive, the valuable cup is soon safe, and the thieves are handed over to the police. Everyone congratulates Thomas on his great "kick" of the hay bale. 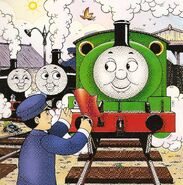 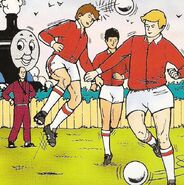 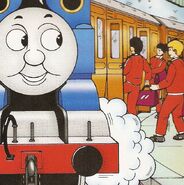 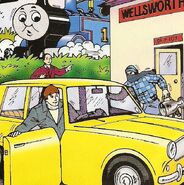 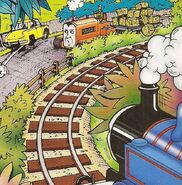 Add a photo to this gallery
Retrieved from "https://ttte.fandom.com/wiki/The_Winning_Shot?oldid=1503968"
*Disclosure: Some of the links above are affiliate links, meaning, at no additional cost to you, Fandom will earn a commission if you click through and make a purchase. Community content is available under CC-BY-SA unless otherwise noted.