The Workmen's Hut is a hut where the workmen sleep on The Little Western.

It was only seen in the fifth series episode Thomas, Percy and Old Slow Coach. 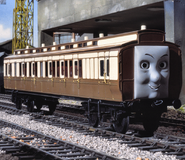 Old Slow Coach (formerly)
Add a photo to this gallery

The workmen's hut on fire

An intact version of the workmen's hut model
Add a photo to this gallery
The Little Western
* RWS only | ** T&F only | *** Other Media only
Retrieved from "https://ttte.fandom.com/wiki/The_Workmen%27s_Hut?oldid=1711327"
Community content is available under CC-BY-SA unless otherwise noted.