The yardman's car belongs to a workman at Crocks Scrap Yard One day, when the scrapyard worker began work, he left his car door open and a curious tiger cub clambered inside. Thomas takes the car, with the tiger inside, back to the Sodor Animal Park

The car's livery is yellow with red-orange wheel arches and a grey bumper. However, on the front cover of the magazine in which the story the car is featured in appears, the car's livery is custard on the upper section and brown on the lower section.

The car in it's brown livery 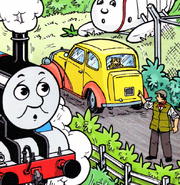 The car's basis
Add a photo to this gallery
Non-rail vehicles
* RWS only | ** T&F only | *** Other Media only
Retrieved from "https://ttte.fandom.com/wiki/The_Yardman%27s_Car?oldid=1793650"
*Disclosure: Some of the links above are affiliate links, meaning, at no additional cost to you, Fandom will earn a commission if you click through and make a purchase. Community content is available under CC-BY-SA unless otherwise noted.