Thomas the Tank Engine Wikia
Register
Don't have an account?
Sign In
Advertisement
in: Annuals and Magazines, Steam locomotives, Other railways,
and 8 more
English

Thirteen is a grey saddle tank engine from the Mainland, who once had an open cab.

Thirteen was a spare engine from the Mainland and was brought to help Donald and Douglas, who were feeling overworked. When he first arrived, he proved to be very unlucky. He caused delays for Donald and Douglas, got hit by a land-slide, and then damaged his firebox which got knocked out of place. Sir Topham Hatt sent him to the works, and Donald and Douglas thought that would be the end of him.

However, after his repairs he came back to Sodor with a bigger firebox and a proper cab which cured his unluckiness. He told Donald and Douglas that he came to Sodor as an unlucky engine, but returned to the Mainland as a very lucky one. He now works there happily, feeling a lot more confident about himself.

Thirteen was a rather unlucky engine. Despite his unluckiness, he did his best to help out Donald and Douglas although his bad luck soon gets the better of him and the twins. After his repairs, he had a bigger firebox which cured his unluckiness, and he returned to the Mainland as a very lucky engine.

Unlike most engines, Thirteen's basis is unknown. He may be a freelance design.

Thirteen is painted dark grey with red lining. He has a red and yellow numberplate with the number "13" he is named after painted on each side of his saddle tank. His running board is also painted red. 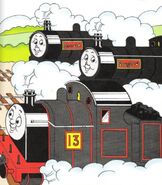 Donald, Douglas and 13
Magazines & Annuals
Русский
*Disclosure: Some of the links above are affiliate links, meaning, at no additional cost to you, Fandom will earn a commission if you click through and make a purchase. Community content is available under CC-BY-SA unless otherwise noted.
Advertisement