Thomas' Christmas Party is the fourteenth Buzz Book, based on the first series episode of the same name and illustrated using photographs from the television series.

Mrs. Kyndley's Cottage is snowed in, but Thomas, Toby, and Terence soon come to her rescue. Later, they hold a Christmas party at Tidmouth Sheds in her honour. 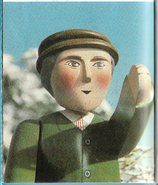 The book picture is mirrored 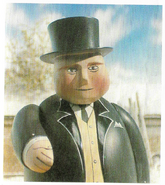 Add a photo to this gallery
Retrieved from "https://ttte.fandom.com/wiki/Thomas%27_Christmas_Party_(Buzz_Book)?oldid=1730473"
*Disclosure: Some of the links above are affiliate links, meaning, at no additional cost to you, Fandom will earn a commission if you click through and make a purchase. Community content is available under CC-BY-SA unless otherwise noted.