Thomas' Island Tour is a My Thomas Story Library-style fold out track book. It reuses illustrations from Story Library books.

Thomas is up early shunting trucks with Percy. Whilst Cranky is praising the two engines for their hard work, the Fat Controller arrives. He asks Thomas to go to Maithwaite station and take some inspectors from the Railway Board on a tour of Sodor and then bring them to Ffarquhar. After talking to the other engines, he sets off with Annie and Clarabel and collects the inspectors. He toots to Terence and Gordon as he puffs around Sodor. By early afternoon, Thomas has nearly finished his tour and is going back to the station. He chats with Terence, who has nearly finished his ploughing, but all of a sudden, it starts to rain. He goes round a bend in the track and suddenly has to brake - the rain has caused a landslide and a huge pile of earth covers the tracks outside a tunnel. Thomas' driver and fireman run off to get help and the line is soon cleared. Back at the station, the Fat Controller introduces the inspectors to Toby and congratulates Thomas and his driver for their good work.

Just then, a workman alerts the Fat Controller that a breakdown train is needed - Gordon has broken down! Thomas volunteers to take the breakdown train and Gordon thanks him. But Thomas still has work to do - he has to take trucks to the quarry and tow James to the station. Initially, the trucks slow Thomas down, but he asks them to behave and reluctantly they do. He soon delivers the trucks to the station and goes to help James, who the trucks have been teasing all day. Thomas tows James back to the station and meets with the Fat Controller. The Fat Controller is very happy, as the inspectors are so impressed, they are going to put Sodor up for Railway of the Year! Thomas is pleased but tired and sets off to the sheds when he meets Elizabeth. He thinks she was going to say something rude like usual, but she congratulates him too. Thomas quickly falls asleep in the sheds - it has been a very busy day. 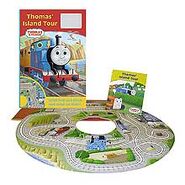 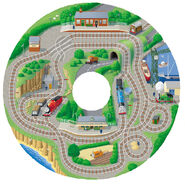 The Map
Add a photo to this gallery
Retrieved from "https://ttte.fandom.com/wiki/Thomas%27_Island_Tour?oldid=1274129"
*Disclosure: Some of the links above are affiliate links, meaning, at no additional cost to you, Fandom will earn a commission if you click through and make a purchase. Community content is available under CC-BY-SA unless otherwise noted.