One morning, Thomas is told to go to the Docks. When he arrives, Cranky tells Thomas that he has to take a giraffe to the Animal Park. Percy and Edward are a little jealous of Thomas' special delivery; they only have leaves and apples to carry. The giraffe is loaded into a truck and Thomas is so excited that he forgets to wait for the giraffe's keeper.

Later on, Percy passes with his truck of apples. Thomas asks if the giraffe can eat some of the apples. Soon the giraffe has eaten all of the apples and he falls asleep. When Thomas arrives at the Animal Park, the giraffe will not wake up. The Fat Controller and the Mayor are very annoyed; they want to see Sodor's new arrival standing tall. Thomas feels bad, but he knows what to do. Thomas takes the giraffe back to Brendam Docks where he collects the giraffe's keeper.

The giraffe listens to the keeper's every word and they soon arrive back at the Animal Park. The Fat Controller is very pleases and he says that Thomas would make a good keeper too. 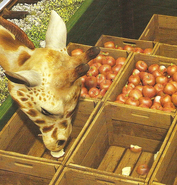 Add a photo to this gallery
Retrieved from "https://ttte.fandom.com/wiki/Thomas%27_Tall_Friend_(2012_magazine_story)?oldid=1438127"
*Disclosure: Some of the links above are affiliate links, meaning, at no additional cost to you, Fandom will earn a commission if you click through and make a purchase. Community content is available under CC-BY-SA unless otherwise noted.