Thomas, Terence and the Snow

Thomas the Tank Engine
& Friends No.5

Thomas, Terence and the Snow is a magazine story.

One autumn Thomas sees a tractor named Terence. Thomas thinks he has ugly wheels, which are referred by Terence as 'caterpillars' and they let him go anywhere. Snow comes and winter has arrived. Thomas' driver is very worried about a heavy fall but Thomas finishes his journey safely. The snow is now covering the countryside and Thomas has to be fitted with a heavy and uncomfortable snowplough. Thomas shakes and bangs it until it is so damaged that his driver has to take it off.

The next morning Thomas goes without his snowplough. The driver is worried about deep snow but Thomas thinks it is 'silly soft stuff'. But there is trouble ahead. As he puffs out of the tunnel he runs straight into a heap of snow and is stuck. Thomas tries to go back but his wheels spins. The guard goes back for help while everyone is digging the snow away. But as they dig more snow falls all over Thomas. Thomas begins to cry.

Later a bus comes to pick up Thomas' passengers and to pull out Thomas is Terence. He pulls the empty coaches away and then pulls Thomas out of the snow. Thomas is very grateful and now Thomas will try to be sensible after his silliness. 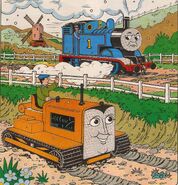 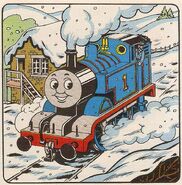 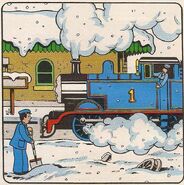 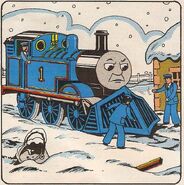 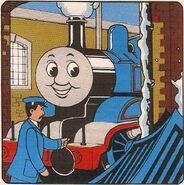 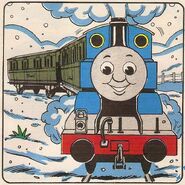 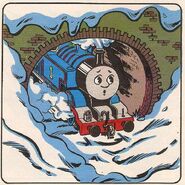 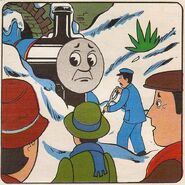 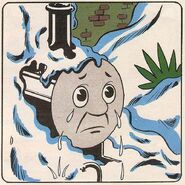 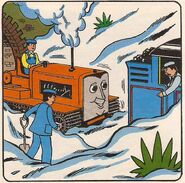 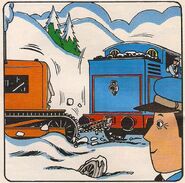 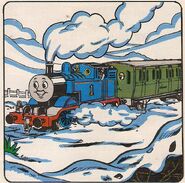 Add a photo to this gallery
Retrieved from "https://ttte.fandom.com/wiki/Thomas,_Terence_and_the_Snow_(magazine_story)?oldid=1772735"
*Disclosure: Some of the links above are affiliate links, meaning, at no additional cost to you, Fandom will earn a commission if you click through and make a purchase. Community content is available under CC-BY-SA unless otherwise noted.