Thomas Comes to Breakfast is the twenty-first Buzz Book, based on the second series episode of the same name. It is illustrated using photographs from the television series.

Thomas thinks he can manage without his driver, but he gets his chance when a careless cleaner fiddled with his controls. He rolls into the stationmaster's house as he is about to sit down to breakfast. Later, Sir Topham Hatt tells Thomas that while he is being mended a diesel railcar named Daisy will do his work. 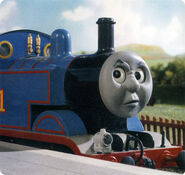 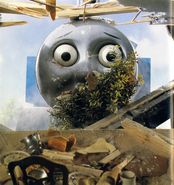 Donald and Douglas from The Deputation 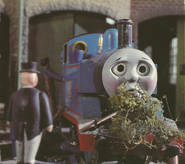 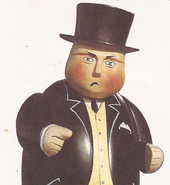 The book picture is mirrored
Add a photo to this gallery

Retrieved from "https://ttte.fandom.com/wiki/Thomas_Comes_to_Breakfast_(Buzz_Book)?oldid=1733499"
*Disclosure: Some of the links above are affiliate links, meaning, at no additional cost to you, Fandom will earn a commission if you click through and make a purchase. Community content is available under CC-BY-SA unless otherwise noted.