“I'm the fastest and the best!”
―Gordon

Thomas Gets it Right

Thomas Gets it Right is a magazine story, it was illustrated by using photographs from the television series.

It had been a very stormy night on the Island of Sodor. Telegraph poles and trees had blown down, tiles came off roofs and some buildings were blown right over. As the engines puff around Sodor, they can see storm damage everywhere.

The Fat Controller comes to the shed and tells the engines that they must all help to put right the things the storm has damaged. All of the engines want to be the fastest and most useful. Thomas is told to go to Maron station.

At Maron station, Thomas finds Farmer McColl stood on the platform with boxes of eggs. Farmer McColl tells Thomas that he must help deliver the eggs all over Sodor. Thomas is disappointed; delivering eggs is not really useful and really fast work. Farmer McColl warns Thomas to puff slowly. Thomas worries that all of the engines will be faster and more useful than him now.

When Thomas stops at a junction, Gordon steams past with some new telegraph poles. Thomas feels very miserable as Gordon thunders by him and he trundles slowly on. At Maithwaite, Thomas meets James who has already made three trips. Thomas puffs slowly one and soon he meets Toby who is already on his second trip. Thomas is now very upset; even old Toby is faster than him. Thomas decides to speed up.

Thomas puffs faster and faster, but he is not being careful. Suddenly, Thomas has to change tracks which causes a big bump. Some of the boxes of eggs had fallen over and some eggs had broken. Thomas manages to deliver the remaining eggs safely, but he worries about what the Fat Controller will say.

Luckily for Thomas, the Fat Controller is not cross at all. He explains that only a few eggs were damaged and Farmer McColl had given them to him so that he could have scrambled eggs for tea. He then reminds Thomas that being really useful does not necessarily mean being really fast. 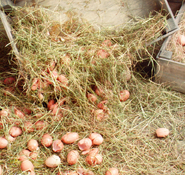 Add a photo to this gallery
Retrieved from "https://ttte.fandom.com/wiki/Thomas_Gets_it_Right_(magazine_story)?oldid=1681398"
Community content is available under CC-BY-SA unless otherwise noted.