Thomas Goes Fishing is the sixth Buzz Book. It is based on the first series episode of the same name. It is illustrated using photographs from the television series.

Thomas wants to go fishing. When the water tower at Elsbridge is out of order, he has to collect water from the river. By the time he arrives at Ffarquhar, he is hissing steam in an alarming way. They put him on a siding where they discover a fish in his tank. Thomas now agrees with the Fat Controller; engines don't go fishing. 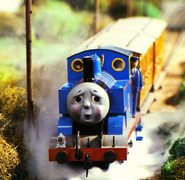 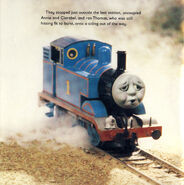 Add a photo to this gallery
Retrieved from "https://ttte.fandom.com/wiki/Thomas_Goes_Fishing_(Buzz_Book)?oldid=1662237"
Community content is available under CC-BY-SA unless otherwise noted.