Thomas Goes Squeak! is a magazine story, it was illustrated by using photographs from the television series.

Everyone on the Island of Sodor looks forward to the Fat Controller's summer concerts. One morning, the engines are excited to learn that a famous singer is coming to Sodor. Gordon is sure he will be chosen to collect her, but one thing all the engines can agree on is that Dirty Percy will not be chosen. The Fat Controller actually chooses Thomas and he tells him to make sure that he and his carriages are squeaky clean.

At the wash-down, Thomas rudely tells grubby Percy to move aside. Soon, Thomas is sparkling clean, but as a workman couples Annie and Clarabel together, they hear a strange squeaking noise. Thomas' driver fetches some oil to take care of the bothersome squeak, but it does not work and Thomas squeaks all the way to the docks.

When he arrives at Brendam Docks, the famous singer climbs aboard Clarabel. Then, she stops and screams; there is a mouse in the carriage. She says she cannot possibly travel in a coach full of mice and she notices Percy in the yard. The singer says that he is dirty like a proper steam engine and she would like to travel with him. So, the singer climbs aboard Percy and the little engine puffs proudly away.

Later, Thomas sees Percy at the wash-down. He tells Percy to go first and the little green engine is glad they are friends again, but wonders what became of the mouse. Thomas takes Percy to the corner of Tidmouth Sheds and explains that the Fat Controller has made her a little house there. Both engines chuckle when Thomas says he has called her 'Squeak'. 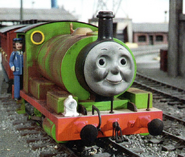 Add a photo to this gallery
Retrieved from "https://ttte.fandom.com/wiki/Thomas_Goes_Squeak!?oldid=1664332"
Community content is available under CC-BY-SA unless otherwise noted.