1st September 1998
Thomas Goes to School is a mini-book.

Every day, Thomas puffs down his branch line and passes a village school. Thomas goes around the curve and whistles to the children on the playground. They stop playing when they hear Thomas and run to the wall that separates the track from the school to wave to him. Thomas would like to go to school, but Sir Topham Hatt tells him he is "far too big to go to school and far too useful". One afternoon, Thomas stops by the school, but the children do not wave or smile.

A group of parents and teachers are standing by the school looking serious. A banner reads "Save our school from closing down! Come to our Grand Fair!" On the way home, Thomas' driver gets the idea to bring his two donkeys to the fair and give the children rides. Thomas' fireman says he has a clown costume to wear and make the children laugh. In the shed that night, Thomas tells Percy and Toby about the school fair. Thomas wants to help because he would miss seeing the children. 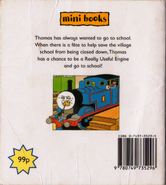 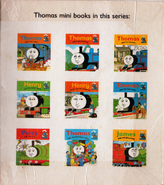 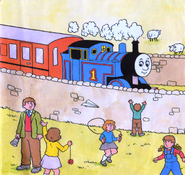