Thomas Saves the Day is a magazine story illustrated using photographs from the television series.

Thomas is visiting a new station, but on the way he comes across a difficult bend. Fortunately, Annie and Clarabel help him to get round it safely. At the new station, the Fat Controller tells Thomas that Annie and Clarabel need to have a refit and he will have to pull ordinary coaches for a while. Thomas is worried; how will he make it around the difficult bend without his faithful carriages?

The following day Thomas collects his new coaches and is so nervous that he bumps into James. Later, whilst puffing around the difficult bend, Thomas comes off the rails and lands in a bush. Thomas is soon rescued and trundles slowly back to the sheds. Suddenly, some trucks rush past him; they had come uncoupled from Edward and are now heading for the new station. Thomas reverses after them and soon arrives back at the difficult bend. This time, he slows down and puffs carefully, overtaking the trucks. He then rushes into the station and warns the stationmaster who quickly gets a message to the signalman. The trucks are diverted into an old siding where they hit the buffers.

A few days later at the Grand Opening, Thomas is reunited with Annie and Clarabel and they are very proud of him! 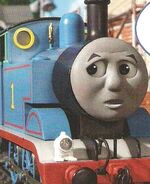 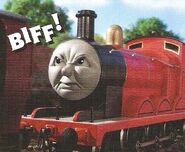 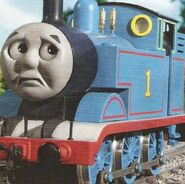 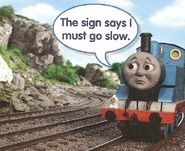 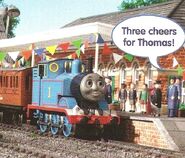 Add a photo to this gallery
Retrieved from "https://ttte.fandom.com/wiki/Thomas_Saves_the_Day_(2009_magazine_story)?oldid=1674980"
*Disclosure: Some of the links above are affiliate links, meaning, at no additional cost to you, Fandom will earn a commission if you click through and make a purchase. Community content is available under CC-BY-SA unless otherwise noted.