Thomas Tells a Lie, retitled Thomas Breaks a Promise in some releases, is a book.

Summer is almost over, but Thomas complains that he has not been able to have any fun. Gordon claims that they are not there to have fun, but this only makes Thomas cross. Later, The Fat Controller gathers his engines and informs them that a new branch line has opened. He needs a volunteer to check the signals and make sure they are working properly, and Thomas says that he will.

At first, Thomas does well with his job. The branch line has dangerous curves and hills, and lots of signals. Thomas is nearly done when he sees a sign for a carnival. Wanting to have fun, he decides to check the signals later. There, he sees the carnival, and the children cheer at the sight of Thomas.

Back at the sheds, The Fat Controller tells Thomas that he has been gone for a long time; he must have done a good job checking the signals. Thomas says he has, but then realises that he forgot to finish his job. With The Fat Controller happy, Thomas knows he cannot tell the truth now. He decides to wake up early and check the rest of the signals the next morning. Little does he know Percy's mail run is diverted onto the branch line after the normal route is out of service.

Percy sees most of the signals, but does not see an unlit one until it is too late. With pouring rain, the slippery rails almost derail Percy at a bend. He does not come off the line, but one of his mail trucks is accidentally destroyed when he rounds the corner. The next morning, Thomas sneaks out of his shed when Percy pulls in with The Fat Controller. Thomas apologises, and confesses that he forgot to check the rest of the signals. As a result, The Fat Controller makes him check all the signals on Sodor twice. 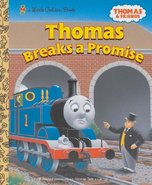 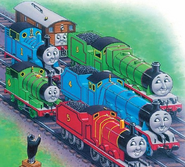 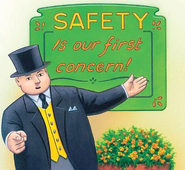 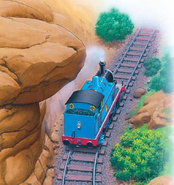 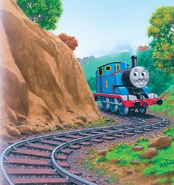 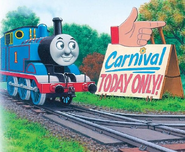 Thomas at the carnival

DVD Feature
Add a photo to this gallery
Retrieved from "https://ttte.fandom.com/wiki/Thomas_Tells_a_Lie?oldid=1766935"
*Disclosure: Some of the links above are affiliate links, meaning, at no additional cost to you, Fandom will earn a commission if you click through and make a purchase. Community content is available under CC-BY-SA unless otherwise noted.