You Can Do It, Toby/Three Cheers for Thomas

Edward, Trevor and the Really Useful Party/Thomas and the Rumours

Thomas and Gordon/Percy's Promise is a promotional UK DVD released with The Daily Record newspaper in 2011. The DVD features one first series episode and one third series episode. 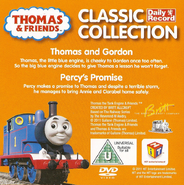 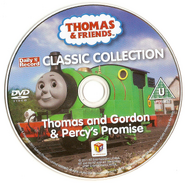 Disc
Add a photo to this gallery
Retrieved from "https://ttte.fandom.com/wiki/Thomas_and_Gordon_%26_Percy%27s_Promise?oldid=1741411"
*Disclosure: Some of the links above are affiliate links, meaning, at no additional cost to you, Fandom will earn a commission if you click through and make a purchase. Community content is available under CC-BY-SA unless otherwise noted.