Thomas and Terence is the tenth Buzz Book based on the first series episode Thomas, Terence and the Snow. It is illustrated using photographs from the television series.

Thomas meets a tractor named Terence, who has funny looking wheels called caterpillar tracks. Later, it starts snowing and Thomas breaks his snowplough. The next day, the plough cannot be fixed in time, so Thomas has to travel without it. He then runs into a big snowdrift, so a bus takes his passengers and Terence pulls him out. 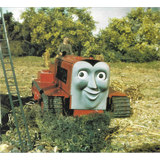 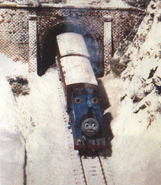 The book picture is mirrored

Add a photo to this gallery
Retrieved from "https://ttte.fandom.com/wiki/Thomas_and_Terence_(Buzz_Book)?oldid=1735946"
*Disclosure: Some of the links above are affiliate links, meaning, at no additional cost to you, Fandom will earn a commission if you click through and make a purchase. Community content is available under CC-BY-SA unless otherwise noted.