“You are a very funny engine!”
―the Thin Controller[src]

Thomas and the Big Bang

Thomas and the Big Bang is a magazine story, illustrated using photographs from the television series.

Thomas has been fitted with a brand new whistle and sets off for work at the Wharf. He has to fill his trucks with bricks, flour, and timber as quickly as possible. To show off his new whistle, Thomas blows it loudly. It makes Rheneas jump and he jerks backwards into his trucks, spilling their loads. Both the engines laugh and Thomas wants to play more jokes.

Later, Rusty comes into the Wharf with his trucks of bricks. Thomas creeps up behind and toots his whistle. Rusty jumps and biffs into the bricks - sending brick dust everywhere. Thomas, Rheneas, and even Rusty laugh and they all set off together to play more jokes on unsuspecting engines. Next, it is Sir Handel's turn to get a fright. He is pulling trucks of flour when Thomas blows his whistle. Sir Handel hits his trucks and become covered in flour. Everyone is having fun, but no work was being done.

Later still, Thomas and the little engines are hiding as Peter Sam trundles into the Wharf pushing logs. Thomas blows his whistle and Peter Sam shoots forwards and his load of logs end up in the canal! The Thin Controller is very cross and orders Thomas to put everything right. Soon, Thomas has his train of bricks, flour, and timber. Soon, the Thin Controller returns, he can see Thomas, but not his trucks until Thomas puffs forward revealing his train. He had hidden the trucks as a joke. This time, even the Thin Controller laughs and declares that Thomas is a very funny engine. 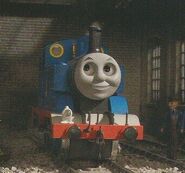 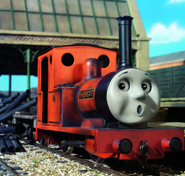 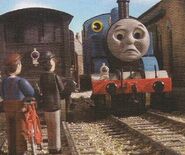 Add a photo to this gallery
Retrieved from "https://ttte.fandom.com/wiki/Thomas_and_the_Big_Bang_(magazine_story)?oldid=1684942"
Community content is available under CC-BY-SA unless otherwise noted.