“Those wooden brakes were no good.”
―James' driver

Thomas and the Breakdown Train

Thomas the Tank
Engine and Friends 4

Thomas and the Breakdown Train is a magazine story.

The Fat Controller comes to see Thomas and tells him that he can be a really useful engine, but only as long as he does not let the trucks tease him. Thomas works hard pushing and pulling the trucks about, when he sees a small coach and two big cranes in the yard which his driver calls "the breakdown train" and tells him that they can lift heavy things. One day, a goods train rushes through much too fast as he whistles for help. The engine is James, and his brake blocks are on fire as he tried to stop the trucks from pushing him to gain their speed, but it is no use and he disappears.

No sooner after, the alarm starts ringing which prompts that James is off the line and to bring the breakdown train urgently. Thomas couples up to them and off they went in a hurry to rescue poor James, who is now derailed in a field. His driver assures him that his wooden brakes were no good, as Thomas arrives to push the breakdown train alongside him. Next he pulls the unhurt trucks out of the way, which is a big job as he has to work hard all afternoon. Later they leave the broken trucks and lift James back onto the rails using the two cranes. James is unable to move by himself afterwards, so Thomas helps him back to the shed.

As they arrive back safely, the Fat Controller congratulates Thomas for his prompt actions and being a really useful engine. He also tells him that James shall have some proper brakes and a fresh coat of paint, and rewards Thomas with a branch line of his very own. Now Thomas is as happy as can be, as he has his very own branch line to run backwards and forwards all day with Annie and Clarabel. Edward and Henry stop by and often tell Thomas the news, and even when Gordon whistles "Poop poop" as he is in a hurry, Thomas whistles back happily. 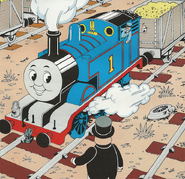 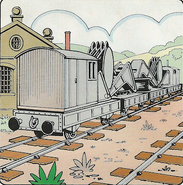 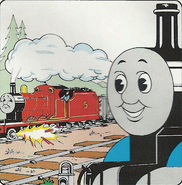 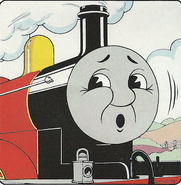 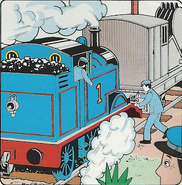 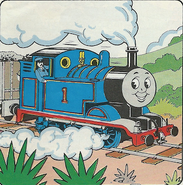 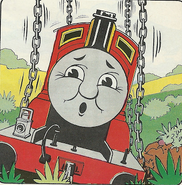 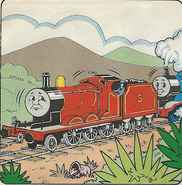 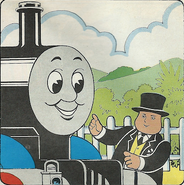 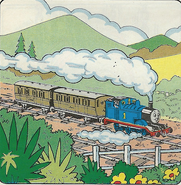 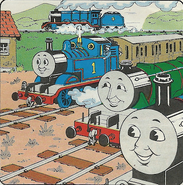 Add a photo to this gallery
Retrieved from "https://ttte.fandom.com/wiki/Thomas_and_the_Breakdown_Train_(magazine_story)?oldid=1662181"
Community content is available under CC-BY-SA unless otherwise noted.