Thomas and the Dinosaur is a book. It was re-released in 2015 as a Golden Book with new illustrations.

Percy is chuffing back to the sheds when he suddenly sees a dragon-like creature. Startled by this, he tells Thomas all about it. Later, Thomas sees the same thing, but is eventually corrected by his driver that the "dragon" is really a dinosaur model. The Fat Controller orders Thomas to take the model to the new dinosaur park.

The Fat Controller, Thomas, and Percy

Thomas and Harold
Add a photo to this gallery 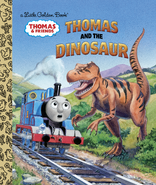 Add a photo to this gallery
Retrieved from "https://ttte.fandom.com/wiki/Thomas_and_the_Dinosaur_(book)?oldid=1662185"
*Disclosure: Some of the links above are affiliate links, meaning, at no additional cost to you, Fandom will earn a commission if you click through and make a purchase. Community content is available under CC-BY-SA unless otherwise noted.