Thomas and the Giant (sticker book)

Thomas and the Giant

Thomas and the Giant is a sticker book written by Christopher Awdry and illustrated by Ken Stott.

A circus was coming to the Island of Sodor and the Fat Controller told Thomas that he had to collect some crates from the main station and deliver them to the station near the circus. He spotted a huge crate and wondered what kind of costume was in that box. The ringmaster told him it was for their giant. Thomas tried to find the giant but he only saw jugglers, acrobats, horses and trapeze artists practising. But in the end he'd found his giant which was a clown on stilts. 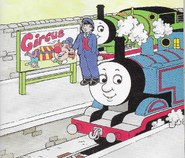