Thomas and the Jet Engine

All the engines on the Island of Sodor work very hard to keep things running smoothly on Sir Topham Hatt's railway. But even with all this hard work, sometimes unexpected things can happen. Who would have guessed that Thomas would rocket past the proud and fast Gordon, thanks to a surprising push from a jet engine? 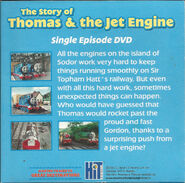 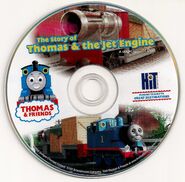 Disc
Add a photo to this gallery
Retrieved from "https://ttte.fandom.com/wiki/Thomas_and_the_Jet_Engine_(Promotional_DVD)?oldid=1959982"
*Disclosure: Some of the links above are affiliate links, meaning, at no additional cost to you, Fandom will earn a commission if you click through and make a purchase. Community content is available under CC-BY-SA unless otherwise noted.