Thomas and the Lamps

Thomas and the Lamps is a magazine story.

One cold winter's afternoon, Thomas is taking his branchline train. He is feeling very cheerful and all his signals are clear. Annie and Clarabel are excited, they really want it to snow.

Thomas is not at all happy; all of his signals have been showing that the line is clear. Toby stubbornly says that his signals have been showing clear, too. Toby decides that the signals must be frozen. He then asks where Thomas' headlamp is. Thomas says that his headlamp is never lit on this train as it's only late afternoon. Toby is confused; it's dark. Thomas looks at the sky and sees that Toby is right.

Toby's driver backs his engine into a siding and Thomas' driver fits a lamp on his. Thomas' driver will telephone the Fat Controller about the frozen signals at the next station. Slowly, Thomas continues on his journey, but not before he assures Toby that his lamp will always be on during his late afternoon trip.

Thomas puffs off and before long, he sees the first flakes of snow flickering in the light from his lamp. Annie and Clarabel are delighted. 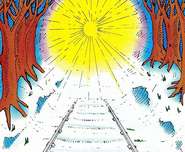 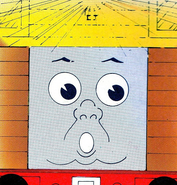 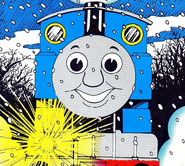 Add a photo to this gallery
Retrieved from "https://ttte.fandom.com/wiki/Thomas_and_the_Lamps?oldid=1771928"
*Disclosure: Some of the links above are affiliate links, meaning, at no additional cost to you, Fandom will earn a commission if you click through and make a purchase. Community content is available under CC-BY-SA unless otherwise noted.