“Oh, I hope I won't miss the fireworks! They are my favourite!”
―Thomas

Thomas and the Lighthouse!

Thomas and the Lighthouse! is a magazine story illustrated using photographs from the television series.

The Fat Controller has an important job for Thomas; he is to very slowly take a special light bulb to the lighthouse. Thomas hopes he will be back in time for the firework display and winter festivals that are to take place that night. After collecting the bulb, he meets Emily, who is taking the merry-go-round to the festival. Then Thomas meets James who is hauling the fireworks. Thomas really hopes that he will not miss all the fun. Percy is helping with the preparations too; he is taking two coach-loads of children in fancy-dress. Next Thomas meets Edward transporting the Chinese Dragon. This proves too much for Thomas and he decides to go a bit faster. Soon he is going so fast that he can't stop, hits a barrier smashing the bulb! Thomas rushes back to the warehouse to collect another bulb. this time he goes slowly and carefully, even if it means missing all the fun. As he chuffs towards the lighthouse, he notices the beautiful orange sky. When the light in the lighthouse is switched on, the light reflects in the sea and Thomas thinks that this is even better than the fireworks! 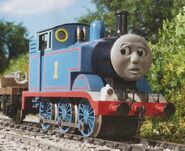 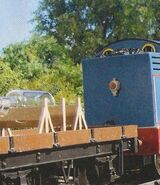 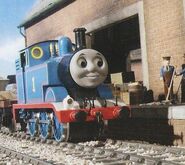 Add a photo to this gallery
Retrieved from "https://ttte.fandom.com/wiki/Thomas_and_the_Lighthouse!_(magazine_story)?oldid=1662203"
Community content is available under CC-BY-SA unless otherwise noted.