Thomas and the
Missing Christmas Tree

Jellybean Books
Thomas and the Missing Christmas Tree is a book. 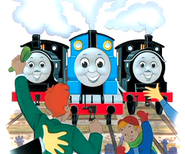