Thomas and the Pony Show

Thomas and the Pony Show

1 June 1993
10 July 1997
(re-release)
Thomas and the Pony Show is a mini book written by Christopher Awdry and illustrated by Ken Stott.

Thomas is waiting at the station. He sees Becky and her mother. They climb aboard, and off Thomas goes. Thomas knows Becky very well. He sees her riding her pony a lot. He puffs past the Farm where she lives. Her horse's name is Barnaby. Thomas will not whistle around the farm as not to scare Barnaby. One day, Thomas notices workmen in Fox's Field. They are setting up for a pony show. Thomas wants to see the pony show because Becky will be there riding Barnaby.

When the day arrives Thomas hums as he runs down the track to the show, but as he comes around a curve, he sees a horse trailer stopped on the side of the road. Becky is standing beside the horse trailer looking worried. They had broken down, and Thomas' driver feels sorry for Becky. When Thomas reaches the next station, he sees Sir Topham Hatt and a porter. While Thomas waits the porter speaks to the guard and Percy arrives pushing a special truck. He carefully couples it to Clarabel. The guard informs Thomas' driver that Becky was on her way to the Pony Show with Barnaby, when her horse trailer broke down.

Sir Topham Hatt asks if Thomas will take Barnaby, Becky and her mother to the show. Her father will wait for the breakdown lorry. Barnaby is loaded into the truck and Thomas sets off again. Thomas gets Becky to the show on time. Thomas watches before he leaves. Before he goes, he wonders if Becky will win a prize, and sure enough, she does. She gives a yellow ribbon to Thomas, as Barnaby has a red one. 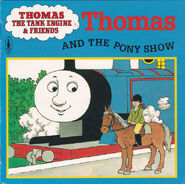 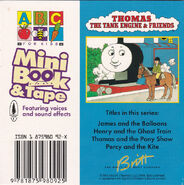 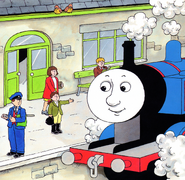