Thomas and the Prize Pig

Thomas and the Prize Pig

William Heinemann
Egmont
Thomas and the Prize Pig is a small board book.

Thomas is taking Farmer Joe and his prize pig Dora to the country show. When they arrive, the farmer goes to collect Dora from the guard's van, but the pig is missing. When everyone has moved away from the van, Dora comes out of hiding and runs onto the platform. Dora runs into the showground and past the fancy dress parade, the band, the roundabouts, and the bouncy castle. Dora then rushes past the sheep and the rabbits that are in hutches. She carries on past the pony rides and the dog show. She ends up running into the pig pen just as it is time for the judging of the best pig. Surprisingly, the judge awards Dora first prize. 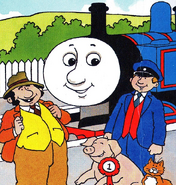