“You smell really bad!"
"Yes, I do, but at least I'm being Really Useful!”
―Diesel and Thomas

Thomas and the Rubbish Train

September 26th, 2012
Thomas and the Rubbish Train is a magazine story illustrated using photographs from the CGI television series.

Early one morning, the Fat Controller gives Thomas the job of being Whiff's back engine on a train of rubbish trucks. On his way to meet Whiff, Thomas passes Diesel who laughs at the little tank engine and tells him that he is going to smell whilst he is helping with the rubbish train. Thomas ignores Diesel and carries on to meet Whiff.

Later at Maron, Whiff and Thomas meet the Duchess of Boxford; she wants to have tea with Lady Hatt, but Spencer is too busy to take her. Thomas tells her to wait at Wellsworth and he will take her to meet Lady Hatt after he has finished his jobs.

As Thomas and Whiff clatter along, Thomas thinks that the Duchess will not want to travel in a smelly engine and he turns down a branch line with the intention of meeting up with Whiff again further down the line. That way, he can get away from all the smelly rubbish. After Thomas rejoins the train, he and Whiff meet Gordon who tells the two engines that they stink. Thomas is worried and heads off down another branch line and joins Whiff again at the next junction. A tired Whiff does not notice he had gone. Further along the line, Emily giggles as she passes the rubbish train and tells both Thomas and Whiff that they are smelly. Thomas heads down yet another branch line before heading to Wellsworth to pick up the Duchess.

As Thomas puffs around the bend into Wellsworth station, he does not notice Whiff and the rubbish train chuffing slowly up to the platform and collides with the rubbish train. The trucks topple over and Thomas is covered in rubbish. Thomas is fine, but he does feel guilty; he has not helped his friend Whiff and now he has created an even bigger mess for him. Thomas has an idea; now that Whiff does0 not have the rubbish any more, he is no longer smelly. Thomas asks him to take the Duchess to tea with Lady Hatt. Whiff is delighted to have such an important passenger. Soon the rubbish is put back into the trucks and Thomas heads off to the Waste Dump with it.

On the way back from the Dump, Thomas meets Diesel again. Diesel tells Thomas that he smells really bad, but Thomas does not mind. He simply tells Diesel that he is being really useful and he heads back to the station. 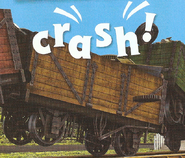 Add a photo to this gallery
Retrieved from "https://ttte.fandom.com/wiki/Thomas_and_the_Rubbish_Train_(magazine_story)?oldid=1870653"
*Disclosure: Some of the links above are affiliate links, meaning, at no additional cost to you, Fandom will earn a commission if you click through and make a purchase. Community content is available under CC-BY-SA unless otherwise noted.