Thomas and the Shooting Star (book)

Thomas and the Shooting Star

2002-present
Thomas and the Shooting Star is a book.

Thomas is having trouble sleeping one night and tries to talk to Gordon. Gordon wants to get back to sleep, so when a shooting star passes by, he tricks Thomas into following it by claiming it will tell him how to go to sleep if he can catch it. Thomas sets off to find the star. He sees a light moving on the tracks but it is just Percy delivering the night mail. Then something lands on his roof, but it's only an owl. He then spies lights in the sky which turn out to be Harold. Harold tells Thomas that Gordon was teasing him and he cannot catch a shooting star. Thomas heads home where he finds Edward awake. He tells Edward the whole story and Edward notes that Thomas might not have caught the star, but he did get sleepy. Thomas agrees and notes that Gordon was sort of right after all. 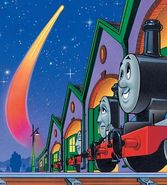 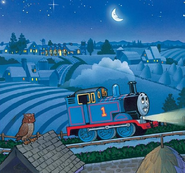 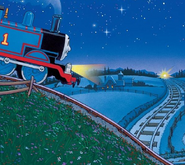 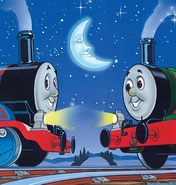 Thomas and Percy
*Disclosure: Some of the links above are affiliate links, meaning, at no additional cost to you, Fandom will earn a commission if you click through and make a purchase. Community content is available under CC-BY-SA unless otherwise noted.
Advertisement