“Sizzling Sodor! What has happened?”
―Victor

As Victor puffs away, Spencer arrives, his shiny silver paintwork is scratched. Instead of asking Spencer what is wrong, Thomas tells Kevin to lift Spencer up on the hoist. Kevin is not sure Spencer needs to go up on the hoist, but Thomas will not listen.

Then,Henry rolls in wheezing and sneezing. Thomas thinks Henry has been given the wrong sort of coal. Henry tries to tell him that he is wrong, but Thomas just will not listen. Then, Kevin whizzes over with Henry's coal and knocks into a big button that lifts Spencer up into the air as coal dust flies everywhere.

Just then, Victor arrives back at the Steamworks and gets covered in coal dust, too. Thomas looks at Victor and then at the mess and the muddle. Thomas decides to apologise and offers to put everything right. So, Thomas and Victor listen carefully to each engine's problem and are able to fix them all. 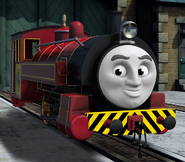 Spencer
*Disclosure: Some of the links above are affiliate links, meaning, at no additional cost to you, Fandom will earn a commission if you click through and make a purchase. Community content is available under CC-BY-SA unless otherwise noted.
Advertisement