Thomas in Trouble (released in the US as Thomas Breaks the Rules) is the first Buzz Book. It is based on the first series episode of the same name and is illustrated using photographs from the television series. 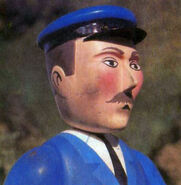 Add a photo to this gallery
Retrieved from "https://ttte.fandom.com/wiki/Thomas_in_Trouble_(Buzz_Book)?oldid=1662243"
Community content is available under CC-BY-SA unless otherwise noted.