When a storm hits Sodor, James, Percy and Henry are sent to pick up supplies to fix the station house. But when they do not return, it is up to Thomas to find them and clean up the mess. 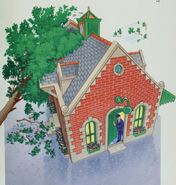