Thomas the Tank Engine's European Word Book, retitled as Thomas' Big Book of Words for American prints, is a vocabulary picture book in which the reader can learn about words and phrases related to things you see on railways.

After a sunny day at the shore, Ben and Polly search all over the train station for their lost beach toys. Will they find them before it is time for Thomas to take them home? 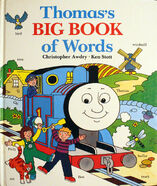 U.S. version cover
*Disclosure: Some of the links above are affiliate links, meaning, at no additional cost to you, Fandom will earn a commission if you click through and make a purchase. Community content is available under CC-BY-SA unless otherwise noted.
Advertisement