Thomas the Tank Engine Wikia
Register
Don't have an account?
Sign In
Advertisement
in: Lost Media, Railway Series adaptations, Behind the Scenes
English

Thomas the Tank Engine was a musical television series planned by Andrew Lloyd Webber from 1973. A pilot episode was produced but cancelled by 1977 due to the US marketing not being interested enough.

Although the first attempt at televising The Railway Series in 1953 ultimately backfired, there was no lack of interest in trying again.

In 1973, Andrew Lloyd Webber, who had read The Railway Series as a child, approached publisher Kaye & Ward with a proposal for a musical television series. At the time, Lloyd Webber was very much the rising talent, having composed two biblical pop musicals, Joseph and the Amazing Technicolor Dreamcoat and Jesus Christ Superstar, as well as film scores for Gumshoe and The Odessa File.

Lloyd Webber had a number of meetings with Wilbert Awdry and Stanley Pickard, Kaye & Ward's Managing Director. Draft contracts were drawn-up and specimen lyrics written by Peter Reeves were submitted:

Come take a ride with the eight famous engines
Famous and Faithful and driven by steam
Each one is run by the branch line Controller
Each part of his scheme
The Fat Controllerʼs team...

However, there was apprehension from the publishers and the author, as the agreement being offered would give Lloyd Webber's company "control of almost everything-idea, the characters, every one of the twenty-six books, and even anything else not yet written on published." Lloyd Webberʼs lawyers argued that such control was necessary in order to "secure the investment money from America which would be needed to pay for the animation and the film-making."

The project looked decidedly uncertain, but in November 1974, Stanley Pickard advised Wilbert that he was "maintaining personal contact with Andrew and still had a slight hope that there might be a way out." Wilbert remained apprehensive: "Once the Americans get hold of it, the whole series would be vulgarized and ruined." Eventually, a contract was signed almost a year later and Wilbert was paid an advance of £500.

Lloyd Webber has ordered a pilot episode from Granada TV. Animator Brian Cosgrove (who would later be one of the founders of Cosgrove Hall Films) worked on the pilot, which would feature 2D cutouts of the engines moving along a background in a style reminiscent of the Ivor the Engine series. The cutouts and backgrounds would be based upon illustrations from The Railway Series, albeit in a unique Cosgrove style.[1]

The pilot episode was completed in early 1976 and Lloyd Webber had really tried very hard to bring the project to fruition, but Granada ultimately decided not to produce a full series as they feared that Awdry's stories were not then popular enough outside the UK to justify investing the time and money needed to make the series and he was a huge stage hit with Evita.

The following characters are mentioned in the specimen lyrics and may have appeared in later episodes.

A bridge similar to the viaduct from the fourth series of the 1995 television series produced by Britt Allcroft would have also appeared.

It is not known what became of the original pilot and where it is today, if any footage still exists. The only known image of the series shows Brian Cosgrove animating the pilot.[1]

Thomas with presumably Henry, Gordon and James in the sheds 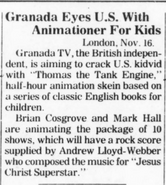 Español עברית 日本語
*Disclosure: Some of the links above are affiliate links, meaning, at no additional cost to you, Fandom will earn a commission if you click through and make a purchase. Community content is available under CC-BY-SA unless otherwise noted.
Advertisement