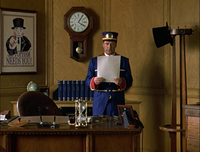 These are the guidelines by which we form our articles. They will help explain how and why the Wikia has its own particular style of doing things.

This Wikia uses British spellings, grammar rules, and terminology, in keeping with the original Railway Series and television show being British. As such, words such as "humor" and "favorite" are spelt with an "extra U" to be: "humour" and "favourite". The term "trucks" is used instead of "freight cars". A car's "license plate" would be a "registration plate" or a "number plate". Etc.

The Wikia also uses the standard "school paper" form by not using contractions (don't, isn't, etc.), exclamation points (!), or the word "you" in articles. Instead, please use "does not", "is not", and the like, and simply end sentences with a period. This does not apply to quotations, where the actual phrasing should be used.

After a list of characters on the episode page, some are followed by either, "(does not speak)", "(cameo)", "(mentioned)", or "(not seen)". In the past, there has been some confusion as to what this means. A "cameo" appearance is a minor appearance where a character is seen, but doesn't speak nor is it referred to. A "does not speak" role is where a character appears and is referred to by name by either the narrator or another character. When a character does not physically appear, but is mentioned by a character or the narrator, that is classified as a "mentioned" role. The "not seen" tag is most often used for books. This is when a character speaks, but isn't seen in any of the illustrations. A speaking role is, obviously, when a character actually speaks. In the CGI television series, anything that requires a voice actor is generally viewed as a speaking role, however there are some exceptions to this rule (Alicia Botti's role in James in the Dark for example). If any other confusions occur, please notify an admin or leave a message to the relevant talk pages.

Additionally, there is an order in which we list the characters. This goes as follows:

Galleries should have no borders and should be in the "center" position. When adding images make sure "File:" goes in front of each image name.

Galleries are now separated from main pages now to keep things tidy. It is not essential for a page to have a seperate gallery if there is little information on the main page; Arlesburgh Maritime Museum is a prime example of this.

Obviously, if a character has not appeared in the Television Series or the Railway Series, those sections would be omitted.

The goofs section is mainly for production errors. Do NOT add plot holes, such as "Thomas' driver should not have let him take Emily's trucks". It is a children's program and there will be some flaws in the storytelling. If there is a major plot hole you think should be added, please consult an admin.

Providing an edit summary is not essential, but it does make an admin's job easier to review your changes. Some things you may think are right which an admin does not, so use the edit summary to explain why you changed an article. If an edit is reverted multiple times by an admin, don't keep adding it back as that could earn you one or more "strikes". What you should do is explain, in detail, the changes on the relevant talk pages. Please make an effort to read edit summaries as well, because an admin may be giving you warning and telling you to stop making a particular edit.

All pages need categories, but not every category goes on every page. Also, "Image" categories only go on image pages.

Retrieved from "https://ttte.fandom.com/wiki/Thomas_the_Tank_Engine_Wikia:Manual_of_Style?oldid=1317134"
Community content is available under CC-BY-SA unless otherwise noted.