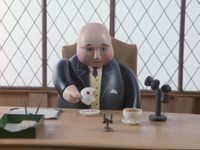 It takes a lot of hard work and dedication to run this wiki. We are lucky to have the best staff team a wiki could ask for to run our wikia. With the admins and moderators making sure every page is in tip-top shape and making sure all of our wonderful members are getting along, there is always something new. Here you can get to know who is in charge and a bit about them.

Bureaucrats are generally seen as the "head admins" of the wiki. They have many of the same rights as regular admins, such as deleting files, editing locked pages. They can also promote and revoke admins, discussion mods and image controllers, and can also promote new bureaucrats. While they cannot directly remove another user's bureaucrat status, they can remove their own if they so desire.

Administrators (Admins for short) have most of the same editing rights as the bureaucrats. They are capable of deleting files and pages, editing locked articles and promoting new discussion mods and image controllers.

Content Mods are selected users with the abilities of an Image Controller and Discussion Mod, with the added ability to edit protected content, change content protection settings, and delete pages.

Thread Mods (previously known as Discussion Mods) are selected users with the ability to moderate talk pages, message walls, and the Discussions forum. They can remove messages, close threads on users' message walls and hand out strikes to users violating the Talk Page/Message Wall rules.

The Heads of Community Relations are users in charge of the wiki's social media profiles. They handle any messages sent to the wiki's Twitter, manage any drama or arguments surrounding the site and try to maintain better communication with the rest of the fanbase.

Bots are pieces of software run on alternative accounts operated by members of staff. These accounts are used for carrying out repetitive changes to the wiki. Bot edits are hidden from the Recent Wiki Activity page, due to their mass edits. Revealing the edits can be done by clicking "Show bots" in the Recent changes header.

Image Controllers were selected users with the ability to moderate image files. They could delete images and hand out warnings and strikes to users violating the Image Rules. They could also moderate videos and audio files, and were also allowed to delete regular pages that are marked for deletion.

Chat Mods were users who had the ability to moderate the wiki's chat. They could block users from the chat, which would kick a user out of the chat and prevent them from returning unless the ban was lifted. As of 2015, chat mods are no longer present on the staff, as the chat has been removed.

Retrieved from "https://ttte.fandom.com/wiki/Thomas_the_Tank_Engine_Wikia:Staff?oldid=1926830"
*Disclosure: Some of the links above are affiliate links, meaning, at no additional cost to you, Fandom will earn a commission if you click through and make a purchase. Community content is available under CC-BY-SA unless otherwise noted.
FandomShop Newsletter Paramount+