“I've got an awful pain in my boiler!"
"Your steam pressure is too high. Stop before you explode!”
―Percy and his driver

Thomas the Tortoise is a magazine story.

It is a holiday weekend on Sodor and the railway is closed. The Fat Controller tells his engines they can have a story tonight and watch the marathon runners tomorrow. Thomas, Percy, James and Edward listen to the story of the 'Hare and the Tortoise' which involves a fast-moving hare who falls asleep and a tortoise who slowly wins their race.

The next day, the marathon runners arrive, but they all have the flu and do not feel well enough for a long-distance race. A lot of people have turned up to watch the race and the Fat Controller does not know what to do. Then, Thomas has an idea and suggests that the engines race instead. The Fat Controller is grateful for Thomas' idea and agrees.

When all the engines are ready, the race begins. James is slow to start; he knows he is the most powerful engine and is sure he will win. Percy, on the other hand, starts too fast and gets a pain in his boiler. His driver tells him his steam pressure is too high and he will have to stop before he explodes. Edward is the next engine to drop out of the race. He takes a wrong turn down a branch line and comes to a halt at a dead-end.

Now, Thomas and James are left following each other around Sodor. Then, on the Main Line, James overtakes Thomas. He races ahead and quickly nears the finishing line. James decides to back onto a siding for a rest; there is no way Thomas the tortoise will catch up any time soon. It is very peaceful in the siding and James falls asleep. He does not hear Thomas puff past at a gentle pace.

Moments later, James wakes up just in time to see Thomas puffing towards the finishing line. James is horrified, but it is too late to do anything; Thomas has won the race. Percy and Edward think James is just like the hare in the Fat Controller's bedtime story and it serves him right for boasting. James feels very silly indeed. 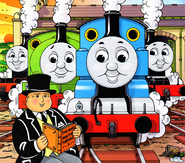 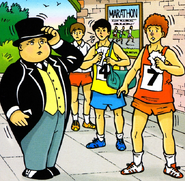 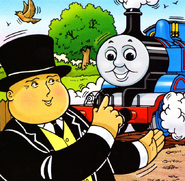 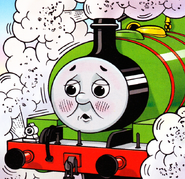 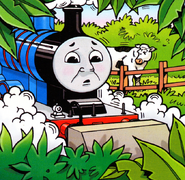 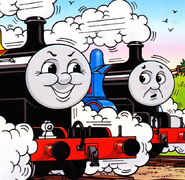 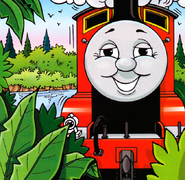 Add a photo to this gallery
Retrieved from "https://ttte.fandom.com/wiki/Thomas_the_Tortoise?oldid=1686847"
Community content is available under CC-BY-SA unless otherwise noted.